Feel free to contact our service team if you need further assistance: Contact options MaltaExcursion.com
Booking date:
Coupon:
i
Enter your coupon code or discount code here.
Participants
i
Enter the number of participants. The number of persons specified is decisive for participation in the services.
Your selection
Age of the
participants
Price for next selection
Age: 13+
18 € p.P.
Age: 5 - 12
12 € p.P.
Age: under 4
0 € p.P. 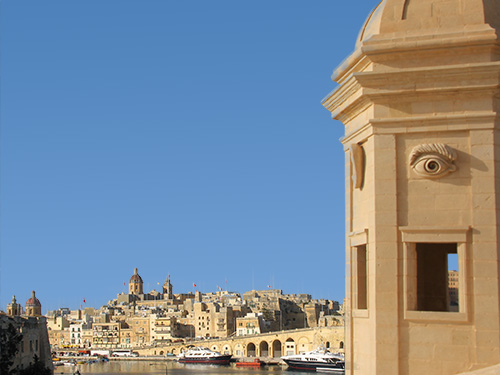 Enjoy a 2 Hour Guided Tour to the Three Cities by a 1920 Bus.
MaltaExcursion.com Warranties and Services:
+
eTicket (Mobile Ticket)
+
Instant confirmation
+
Secure payment options
Travel times:
i
If you book a transfer, the start time will change slightly depending on where your accommodation is located. You will receive the notification after finalizing your booking. Notes on travel times
Start:
Duration:
Finish:
10:45 AM*
2 hours *
12:45 PM*
Transfer times to and from your accommodation depend on the location of your accommodation. These depart between 09:30 from the extreme north and a little later from the rest of the island. The return transfer takes place in the afternoon at 3:00 p.m., 4:00 p.m. or 6:00 p.m.
Included:

2 Hour Guided Tour to the Three

Vintage Bus
Description:
The Three Cities are located on the south of Valletta at the Grand Harbor and consist of three cities: Vittoriosa, Cocpicua and Senglea. The guided tour will start from a meeting point in Sliema.
+ show all
Step back through the mists of time as you drive to the fortress of Cottonera which is widely known as the Three Cities, these being Vittoriosa, Cospicua and Senglea. These cities were built and fortified by the Knights of Malta. You first start with an informative drive through Cospicua. Cospicua has been inhabited since Neolithic times. Prior to the 18th Century it was known as Bormla, a name which is still in use. Its fortification walls, constructed to protect the town and its neighbors Vittoriosa and Senglea, were built by the Knights of Malta. Construction began in 1638 but was not completed for another 70 years. In 1722, Grand Master Marc’ Antonio Zondadari declared Bormla a city and in view of its strong bastions named it Citta’ Cospicua. You will then visit Vittoriosa, ideally situated for safe anchorage and over time it has developed a very long history with maritime, mercantile and military activities. Prior to the establishment of Valletta as a capital city of Malta, military powers that wanted to rule the Maltese islands would need to obtain control of Vittoriosa due to its significant position in the Grand Harbour. Vittoriosa is now a location of several tourist attractions. The historic Vittoriosa Waterfront contains the former Palace of the General of the Galleys and the Order of St. John’s treasury. The area was refurbished in the early 2000s and both buildings are used for other activities: the former is now a casino, while the latter is home to the Malta Maritime Museum. A second museum, the Vittoriosa 1565 Museum, is also located in the town and is dedicated to the siege and the battle in the town in 1565. The third city is Senglea, joined by a land bridge to Cospicua during the time of the Knights of St. John and as a result it became a peninsular in shape. During the time of the Knights of St. John, Senglea was used as a hunting area and was known as L’Isola di San Giuliano. In 1311 St. Julian’s church or chapel was founded. This was the first building to be constructed. On 8 May 1552 the foundation stone of Fort St. Michael was laid. Work on the fort, which was designed by Architect Pedro Pardo was completed in 1553. Construction of walled town Senglea took place during the following decade. The area, which had until the 1550s been known as Isola di San Giuliano or Isola di San Michele, was given city status by Grand Master Claude De La Sengle and was named after him. A detailed English commentary by the driver will help you unfold the history of Valletta and the Three Cities connected with two Great Sieges of 1565 and 1942. Tour is operated by one of the first two wooden bodied buses purchased in 1921 by the Cottonera Motor Bus Company. These buses were licensed to operate routes between Cottonera and Valletta and were made by local carpenters and mechanics, later called as bus body builders. At that time the local carpenters and mechanics were encouraged to build bus bodies so that the company Cottonera Motor Bus Co. could increase its fleet rapidly. Tour leaves from Sliema Ferries (opposite of Marks and Spencer).
Customer reviews:

5 stars out of 4 Reviews
Info
News
27.02.2022 - 12:50 Uhr
Hypogeum in Malta
In the last few days, the number of bookings for the Hypogeum has risen sharply. The Hypogeum and other tours are fully booked several days in advance. Book early this year!
MaltaExcursion.com
29.07.2022 - 12:50 Uhr
MaltaExcursion.com
10+ years in business
20+ years experience
100+ tours, excursions and activities in Malta, Gozo and Comino